Home » Tony Heaton: The Grand Tour, with The Tourette’s

Tony Heaton: The Grand Tour, with The Tourette’s

“The Grand Tour, with The Tourette’s

Performance with Film, Sound and Voices.

This is an annotated translation of an extract from the Grand Tour diary of Georg Heinrich von Berenhorst (1733-1814), the illegitimate son of Leopold I, Prince of Anhalt-Dessau…

…At Rome I was next to him (Sterne) in the Sistine Chapel when they were singing the famous Miserere in Easter Week. He was so full of remarks that this melancholy ceremony inspired in him, that not being able to contain himself he continually whispered to me, and often so loud, that his voice was as audible as the Orchestra of Eunuchs. ‘For heaven’s sake! My dear Sir,’ I said, ‘you will have us ignominiously ejected.’  In the end, despairing of keeping him quiet, I found myself obliged to go and find another seat.

I want to use the essence of this observation and the context, the idea of behaviour and disruption…

The images it creates for me, of the ceremony, the grandeur and significance of the Sistine chapel, the playing of the melancholy Miserere, and the setting of Psalm 51 by Italian composer Gregorio Allegri. Composed during the reign of Pope Urban VIII, during the 1630s, for the exclusive use of the Sistine Chapel.

The excitement of Sterne, the loud-whispers, this clash of convention, etiquette, the lack of decorum in expected conduct will be what I explore in this work.

Using film for the recording of Miserere in three different key locations, the Sistine Chapel, York Minster and Stern’s local church where he preached;

Images of the burning of Sterne’s books and the whispering that creates an atmospheric static throughout the piece, sometimes performed by Jess Thom, (Touretteshero)’, and others in a whispering choir. 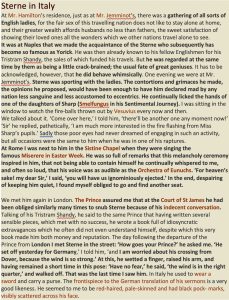 I have highlighted in bold what will become the working script for the project.

The piece will have a number of elements:

Each film will be shown simultaneously but will be subtly different in imagery, the people in the choirs, architecture of location, the nature of the filming and editing. Each will generate its own sound.

It will be immersive.  Its melancholy will become discordant, disjointed, disrupted…

There is something of the reading of the diaries of others suggested in the piece, this notion of ‘private thoughts’ – the whispers of impropriety…

There is also a dark humour to it, important when thinking of Sterne. Humour will be important –

Whispering over the Miserere –

Much of my work explores my personal analysis of these everyday interactions. Sometimes art making becomes self-psychoanalysis.

As a sculptor I work with a wide range of materials depending on what material is right to develop the idea. I constantly return to direct carving of stone as a discipline but I often use what has been called ‘the impedimenta of disability’ in my work.  This might be charity collecting cans, old wheelchairs or invalid carriages, my intention being to transmute or subvert them into something else through sculpture. I have also worked with light, neon and film.

My work has also utilised found materials and objects that have had a particular identity and could be transmuted as part of the realisation of the idea.  As a disabled person, many of the objects I have used or ideas I have pursued have been within a disability context and have resonated with my experience as a disabled person, both individually and in my interaction with the world.

There are usually layers of meaning to entice other humans into the work or the game of it.  Disabled people often seem invisible or ‘other’ and I have explored this notion.

Predominantly I am interested in how thoughts and ideas can be translated into form and therefore say something in a new and expressive way.

I return to themes, usually when I review older works or ideas that were never fully resolved at the time.  I am reminded of Henry Moore’s comment about walking along the same stretch of beach but finding new and interesting stones that had been there, unnoticed.  Or, like re-reading a book when you discover things that you had missed the first time, perhaps due to life and experience.