On reading that the name Ushaw comes not only from the Yew trees originally on the site but also, probably from the Old English “Ulve Shaw” meaning Wolf Wood; inspired images of an installation to be visited at night: of dark dense forests with hidden openings and sudden flashes of golden light illuminating paths to secret treasures within oak panelled walls.

As a site -specific artist this blue-sky thinking has excited me. From the key words of the brief, I took secretive, isolated, atmospheric, spiritual and embracing as my starting points and remembered Perrault’s original fairy tale “The Sleeping Beauty in the Wood” and researched his description of the forest that grew around the castle to protect her. “There grew up all around the park so vast a quantity of trees big and small, with interlacing brambles and thorns … The tops alone of the castle towers could be seen and these only from a distance … should have naught whatever to fear from prying eyes.”

I imagine forest walls of interlaced branches enclosing Pugin’s architecture as if the House and Chapel were forced to slumber for 100 years, when times might change, and their faith and worship would not be overshadowed by the threat of torture imprisonment and execution. From these enclosing and embracing walls would run maze like tunnels- created from overlapping branches- within the Ushaw Gardens that could be explored in daylight by every age of visitor.

Seen from a distance, the rooftops of the House and chapels are silhouetted against the sky whilst the rest of the buildings are enclosed within the blanket of the interlaced forest walls. Secreted within these walls of branches are video mapped images of red eyes of wolves darting amongst the creepers that entwine the branches appearing and disappearing.

The howls of wolfs are heard and then as if by magic hidden doors within these forest walls open to reveal tunnels of golden light that pierce the darkness, these panelled wood corridors lead to the house and chapels and their wooden panels when invited to touch open to reveal secret chambers with objects selected from the existing treasures from the House.

Within the House itself the lights are dim, and the sound of distant music can be heard. Shafts of light, light the corridors leading to the courtyard of the house where the “sleeping giant” of faith and hope is waiting to be awoken. A skeletal wooden structure reproducing the architecture of Pugin’s gothic revival Chapel is created within the courtyard. There is no altar, instead, a magnificent Yew Tree lit so that it appears to glow, and within the outlines of the of the columns and arches can still be seen the original House. The viewer is invited to sit within this lacelike structure on wooden pews illuminated by candlelight and hear choral singing from different faiths from hidden speakers placed all around. This chapel of safety embraces everyone and allows contemplation and peace.

Geraldine Pilgrim works across the visual arts and theatre and is known for her evocative installations and participatory site-specific performances which create a contemporary dialogue with occupied and empty buildings, historic houses and landscapes. Her site work specialises in installations and performances in unusual buildings and landscapes where the architecture of the site is used as inspiration and narrative, gradually revealing memories and atmospheres that have built up over the years, together with the history – imagined and real – of the space. Her installations and performances have taken place in empty Office Blocks, Schools, Hotels, Swimming Pools, Factories and Hospitals as well as Castles, Stately Homes and Public Parks. Geraldine trained as a fine artist and theatre designer and has been commissioned by Heritage organisations including: Harewood House, National Railway Museum York, 14-18 NOW, National Trust, English Heritage, and the Royal Pavilion Brighton and funded by Arts Council England, British Council, Jerwood Foundation, Paul Hamlyn and the Gulbenkian Foundation. 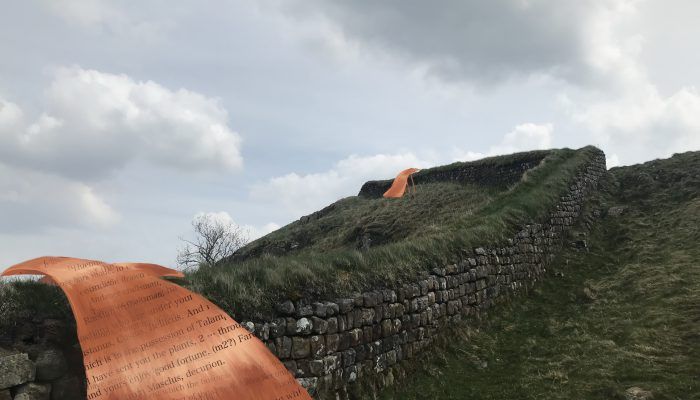