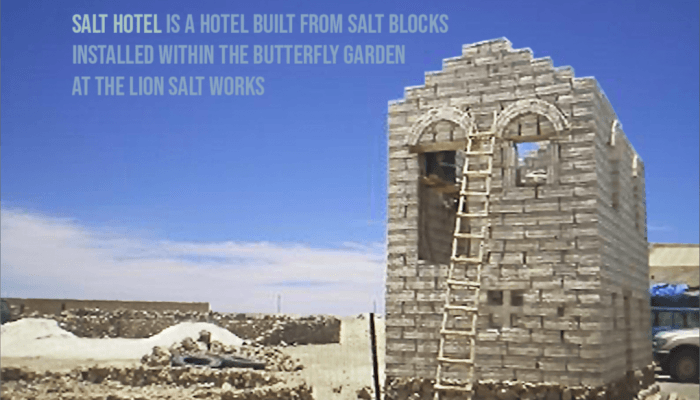 (Full information and images can be found in the PDF above.)

Salt Hotel is a hotel built from salt blocks installed within the Butterfly Garden at Lion Salt Works.

Salt Hotel is installed within the Butterfly Garden to create an environment that can encourage butterflies, while allowing the audience to experience the garden in a unique way.

‘When you think about ways to attract butterflies, this generally involves planting flowers that supply nectar for the adults or leaves for the caterpillars. However, an alternative technique is to offer salts, especially sodium, which butterflies crave because their diet is rich in potassium but not sodium’

Salt Hotel is a copy of a house made with salt bricks in Colchani, a salt processing village on the edge of Salar de Uyuni, the world’s largest salt flat, located in Bolivia.

Uyuni tourists can stay in one of several salt hotels where the building, tables, chairs, even the beds, are made of salt.

The proposed hotel is a two-storey building, large enough to contain a bedroom, living area, bathroom and kitchenette and is built from the salt blocks that were traditionally made as part of the salt processing at the Lion Salt Works.

‘The salt is raked from the salt pan after the brine is heated, evaporates and crystals start to form, It is then scooped into salt ‘tubs’ which are left to drain in racks at the side of the pan, once drained, the salt retains the form of the tub and can be tipped out and taken, on a barrow, to the ‘hottie ‘ next door.

The ‘Hotties’ aka, the Stove House, contained the flues which ran horizontally from the hypocaust underneath the boiling pan, the damp blocks of salt would then be stacked on to the brick flues and dried over the course of a week to ten days.’

Salt Hotel exists as an artwork, unique hotel, tourist attraction, ecological site and architectural oddity in a landscape shaped and developed by salt production, that remains connected through this history to geographies, ecologies and societies across the world.

Salt Hotel is part of an ongoing process of recreating found architecture as sculpture. Information gleaned from anonymous google images is used to piece together three-dimensional form from two-dimensional images, allowing an element of editing, adding and deleting to create an object that acts as a credible architectural form. These works question the meaning invested in an object when dislocated from its original surroundings and placed within a new context. The work explores the relationship between reality, desire and experience, through ideas of vicarious travel and exploration of inaccessible places.

For the past two years, Cath has been working in Winsford, Cheshire, home to the oldest working salt mine in the country and has been researching the ways that salt connects this part of England to cultures geographies and histories across the world.