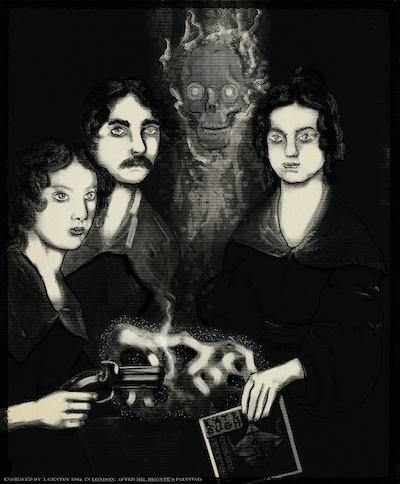 “I was inspired by the Brontë Parsonage Museum for the very simple reason that I love the Brontë sisters’ work, and I’ve been thinking fairly nonspecifically but persistently of ideas for an art project about them for years! Jane Eyre and Wuthering Heights are two of my favourite nineteenth century books (Sorry, Anne…) I’ve never done the pilgrimage that thousands of people do every year, but I understand why they do it and I’d happily do it myself given the chance.

In general I love museums, particularly museums dedicated to a very focused subject or person, and I find them extremely rich in material for an artist to work with. I’m also very interested in the visitors to museums and the things they may be seeking in going there. I’m sure like most creative people the Brontës would much rather have had support, understanding, acclaim and some cash in their hand while they were alive, but there is still a pleasing sense of justice in the Brontës living forever in people’s imaginations to such a degree that their fans and readers seek whatever additional closeness they can beyond the sisters’ equally immortal books by visiting the places they once knew and loved.

With all that in mind, I present:

Using the reconstructed rooms and surrounding areas of the Brontë Parsonage Museum in and near Haworth, up to eight participants at a time take part in a day long LARP (Live Action Role Playing Game) in which they play Charlotte, Branwell, Emily and Anne in an alternate reality 1850s where all four survived. The transgender player characters of Acton, Beatrice, Currer and Ellis Bell are also/alternatively available. Their shared childhood imaginary world of Gondal, their literary alter egos, and events or characters from their books all begin to impinge upon their real lives. Along with doubles or near doubles of themselves appearing, the Brontë home has apparently turned into a museum, which even more disturbingly seems to chronicle their own lives, writings and deaths.

Appropriate costume, props and meals are provided. How the story progresses and concludes depends entirely upon the players and their decisions. The player character roles can be taken by people of any age, gender identity, background, or relationship to each other, and the entire LARP environment is fully accessible to disabled people. Personal or idiosyncratic portrayals of the siblings and explorations of their familial rivalries and commonalties are very much encouraged.

This game celebrates the paracosmic creativity and familial bond of the Brontë family, rescuing them from their posthumous mythology of tragedy and giving them at last the kinds of group adventures previously restricted to their shared childhood stories and individual novels.”

Alistair Gentry is a writer and artist or an artist and writer… sometimes other things, too. He lives in the UK, currently in London. He makes performance lectures, interventions and live role-playing games, mainly for communities and audiences outside of conventional gallery or performance spaces. He likes folklore, magic, silly costumes, museums, absurdity, the uncanny valley, and making machines and systems do things their makers wouldn’t approve of.

2018-2019 he was research artist in residence at The Open Data Institute in London, developing DoxBox trustbot: a tech drag AI for playing with digital ethics, with performances in London at Furtherfield’s Citizen Sci Fi Future Fair and the ODI’s Annual Summit. His Portland Office for Imaginary History, has now been running for many years. He writes about independent artists and artist-led projects in every issue of Sluice magazine.