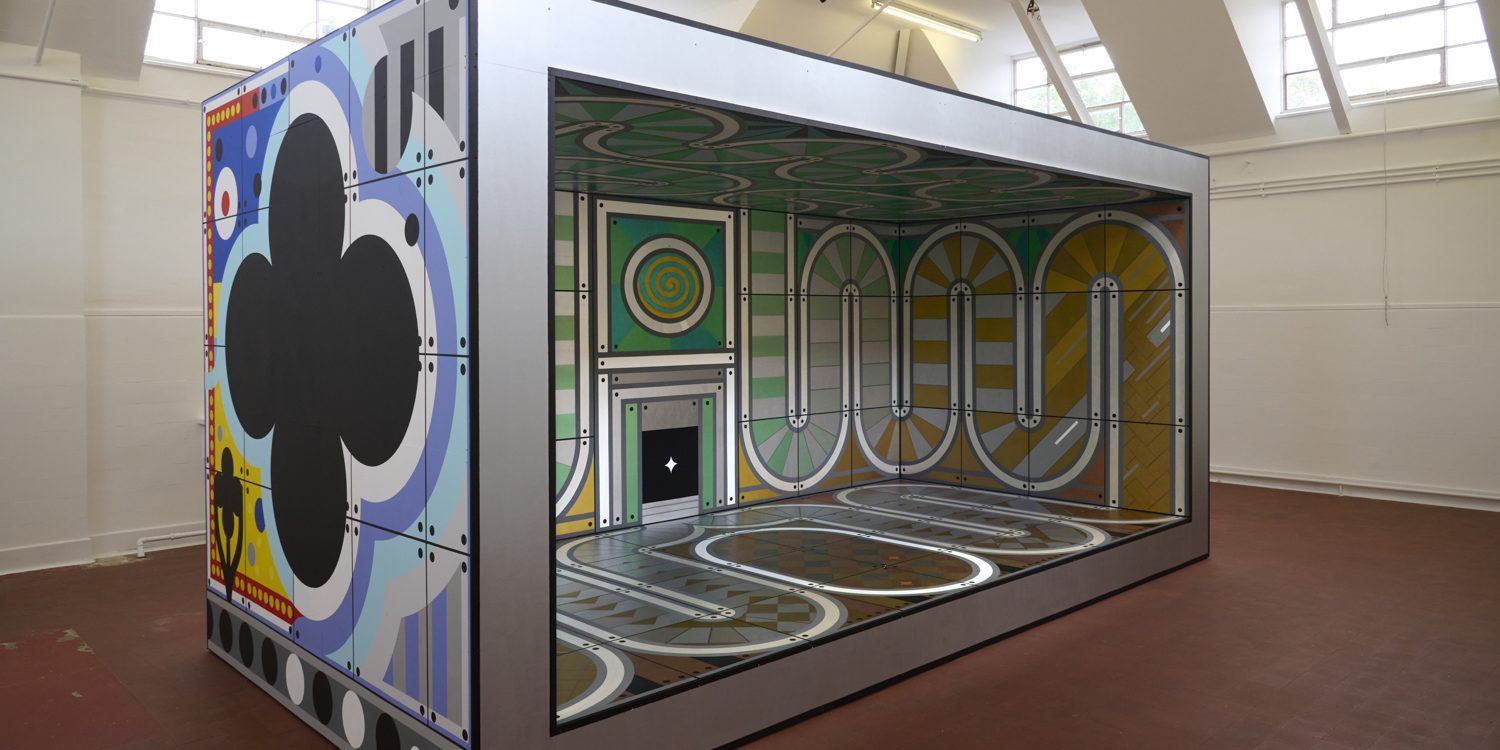 “When it was first produced, more than 100 years ago, the red, yellow and blue of Sunlight’s packaging was loud and modern, crashing into people’s homes, shops and high streets. It still has that visual power today, I wanted to play with an iconic graphic and make it reveal something of the factory village behind it.” – Tod Hanson

Port Sunlight Village Trust (PSVT) was one of six heritage sites selected by Arts&Heritage to take part in its Meeting Point 2018-2019 programme. PSVT took part in a series of A&H training workshops and visits, to learn how to successfully deliver a contemporary art project at the museum. PSVT then developed their own Artist’s Brief, and presented this to 60 artists from across the UK at a networking event. From Expressions of Interest, four artists were shortlisted to draw up a more detailed proposal from which PSVT selected Tod Hanson for the commission.

Port Sunlight village was founded by William Hesketh Lever in 1888 and built to house Lever’s ‘Sunlight Soap’ factory workers. The village is home to more than 900 Grade II listed buildings set in 130 acres of parkland and gardens. More than 30 different architects created the buildings, monuments and memorials still standing today, and nearly every period of British architecture is represented through revival design.

Tod Hanson responded to this social and architectural history with Box Room, encapsulating both the factory and home experience.

“Port Sunlight exists thanks to a reliable product and its loud logo design, an image once made so ubiquitous that it remains iconic to this day, even though it’s not in use. The Victorian Sunlight soap box logo marks the beginnings in use of a funfair visual energy to marketing, especially cleaning products, using vibrant colours and dynamic compositions to imbue positivity and excitement to a product used for the drudgery of hand washing clothes, the removal of industrial pollutants; then and still to this day.

I wanted to amplify the boxes’ graphic pop razzmatazz, do it at scale, to be something like a fairground ride, a billboard or riveted shipping container; suggestive of the emerging industrial juggernaut of Lever brothers and multinational Unilever.

[…] Inside the Box Room I wanted to combine a domestic interior with that of a factory, by using a classic fireplace format, but with mechanical decoration. To suggest how Port Sunlight’s cottages were extensions of the factory, mini factories, they were places of workforce maintenance, employee service stations for the running of an efficient assembly line. This cleaning and feeding maintenance was mostly carried out by women, who were also in command of the domestic realm, its budgeting, decoration and furnishing.

I wanted to force together Port Sunlight’s contrasting aspects into one ornate object, sitting shrine like in the flattened pyramid of the church hall.” – Tod Hanson

Port Sunlight was declared a conservation area in 1978. It contains more than 900 Grade II listed buildings in 130 acres of parkland and gardens.

Port Sunlight Village Trust (PSVT) is an independent charitable trust responsible for preserving and promoting the village. Set up by Unilever in 1999, the Trust works with Port Sunlight’s residents to create a self-sustaining village for all who live, visit and work in Port Sunlight.

All of the village’s parks, gardens, monuments and memorials are cared for by PSVT, as well as the majority of public buildings and nearly a third of the houses. The entire village is a Designated Conservation Area and nearly every building is Grade II Listed.

PSVT also runs Port Sunlight Museum (including SoapWorks and the Edwardian Worker’s Cottage) which celebrates the unique heritage of the village – its development, architecture, people and landscapes – through special exhibitions, events, learning programmes, and volunteering opportunities, all underpinned by our historical collection and archive.

Chris Sharratt, freelance writer and editor based in Glasgow, visited Port Sunlight Village to view the visually exuberant Box Room by Tod Hanson.
Chris’s observations and reflections on the work, making connections between early consumer advertising and Tod Hanson’s own distinctive use of repeated graphic motifs, can be read below.

A box of delights, a box of tricks, a Pandora’s Box? Tod Hanson’s sculptural installation, Box Room, asks questions that evoke industrial history and ideology, consumption and control, family and faith. This brightly painted shipping container-sized structure sits, shrine-like, at the newly whitewashed heart of Port Sunlight’s Church Hall. Its busily decorated exterior recalls the red, blue and yellow colour blocks of the original 1884 packaging for Sunlight soap, the wholesome laundry product that helped turn Lever Brothers into what is now a global consumer giant, Unilever, selling us everything from ice cream to washing powder, mayonnaise to tea.

Hanson’s take on the Lever story and Port Sunlight’s place within it is rich in references that stretch from the fireplace of a Victorian factory worker’s home to palm oil plantations in west Africa. It’s a journey that makes connections through a visual language which combines the design flourishes of early consumer advertising with Hanson’s own distinctive use of dots, mapping and repeated graphic motifs.

Another box readily springs to mind here – Andy Warhol’s Brillo Box series from the 1960s. Yet while that iconic, ground shifting work elevated a banal, everyday consumer object into something worthy of sculptural representation, Hanson instead deconstructs both the product and its promises. To use a more contemporary cultural reference, if this were an ‘unboxing’ video on YouTube – if you’re not familiar with the genre, try entering the term into a reliable search engine – as the layers of packaging come off, talk would turn to the people and places involved in making the item, the industrial reality behind the lifestyle dream, rather than the merits or otherwise of a shiny new piece of tech.

Hanson’s ‘unboxing’ comes in the form of a heavily patterned interior domestic space, revealed proscenium arch-style along one side of the structure. Here the colours become muted and metallic in a domestic space snaked by painted, factory-style conveyor belts, their curves offering a visual link to the exterior’s architectural grids that call to mind street plans and gardens. Box Room, then, can be seen as a meeting place for unpicking what capitalist consumer culture proposes and what it actually delivers, whether that’s the allure of a better, more comfortable life through ‘perfectly pure’ soap suds, or the social control that inevitably came with the workers’ village model of Port Sunlight, with the factory a short walk away from home and the boss living just round the corner.

Not that Box Room is in anyway didactic or hectoring. Hanson’s CV may include time working on projects for Greenpeace UK, but there is no sloganeering zeal. It feels significant, in fact, that while the first thing the viewer sees as they enter the space is the back of the installation which directly draws on the Sunlight soap design, any text that would have been on the original packaging has been replaced here with bubble-like circles and dots. You could say the original messaging has been redacted – albeit playfully – turning a specific historical item into a modern marketing trope: Bright colours! Bold graphics! Buy now!

Do we buy it? Do we delight in the surface promise of our consumption-driven lives or do we want to explore other routes, find different narratives, construct another way? Box Room asks us to think about such things, to consider how we got from there to here – and perhaps decide what has and hasn’t been worthwhile about the journey. 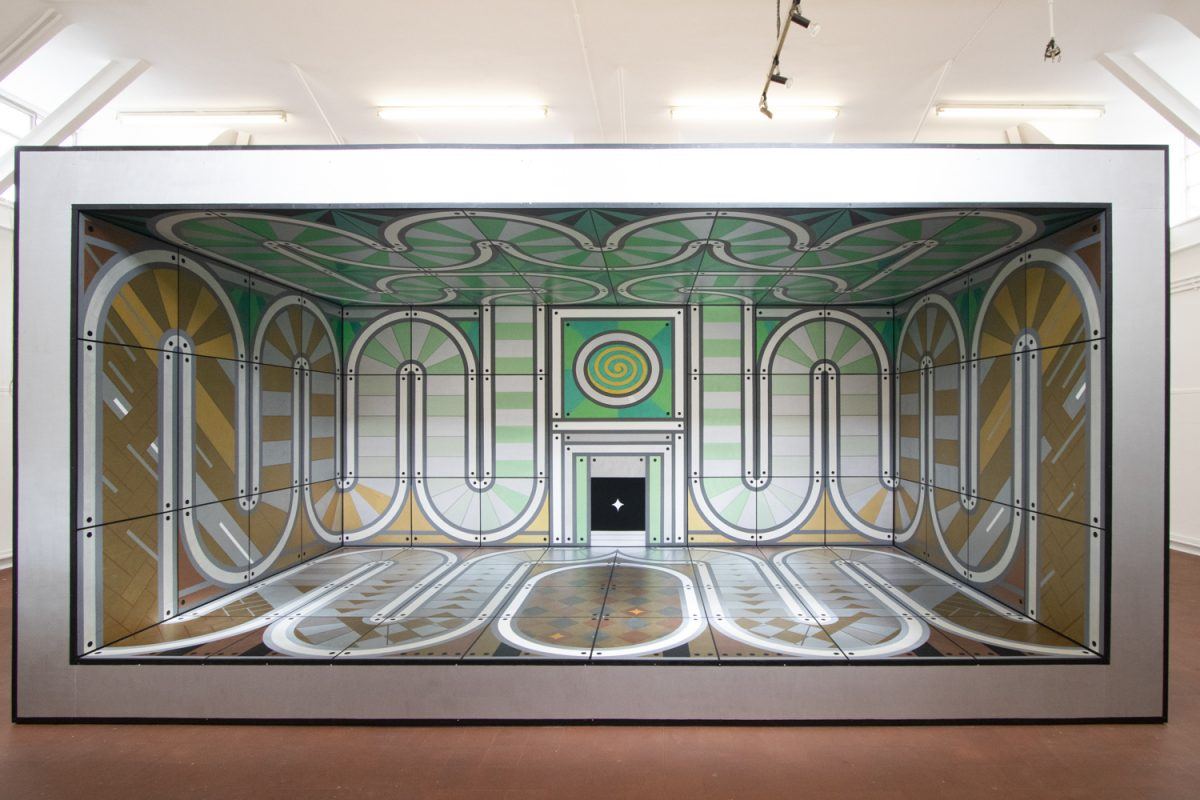 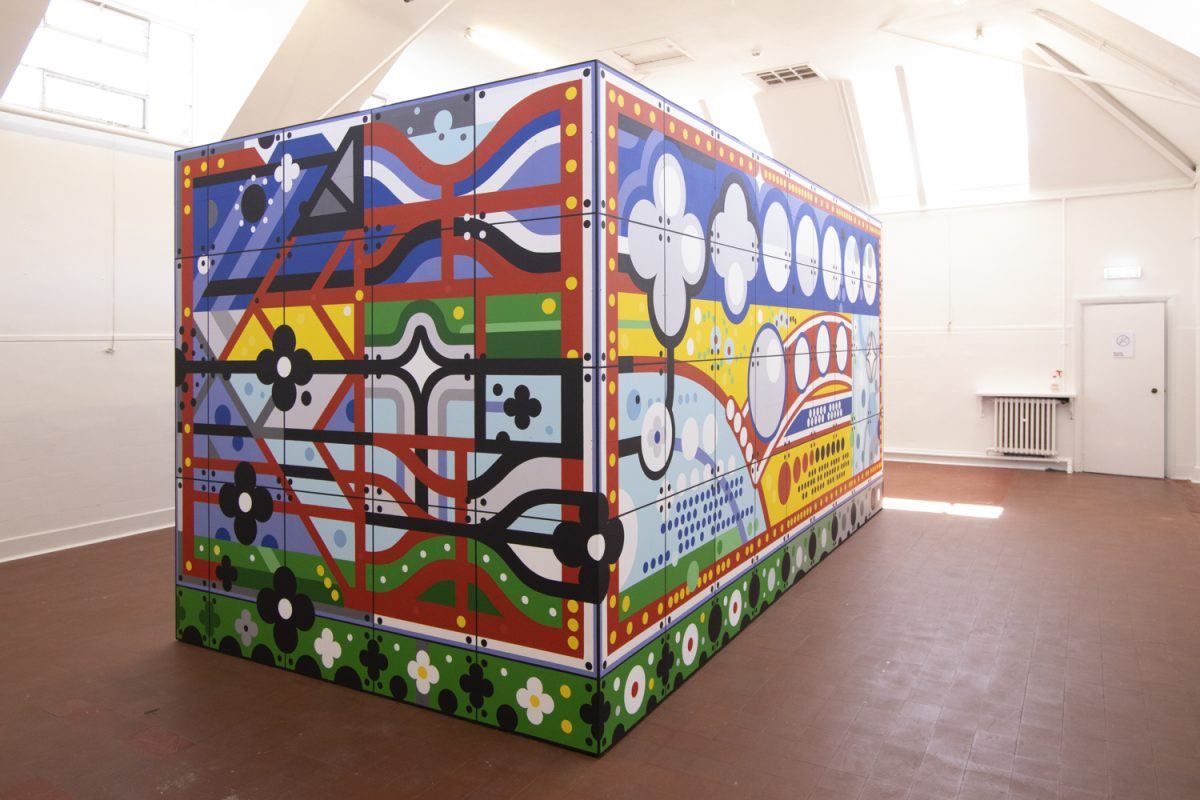 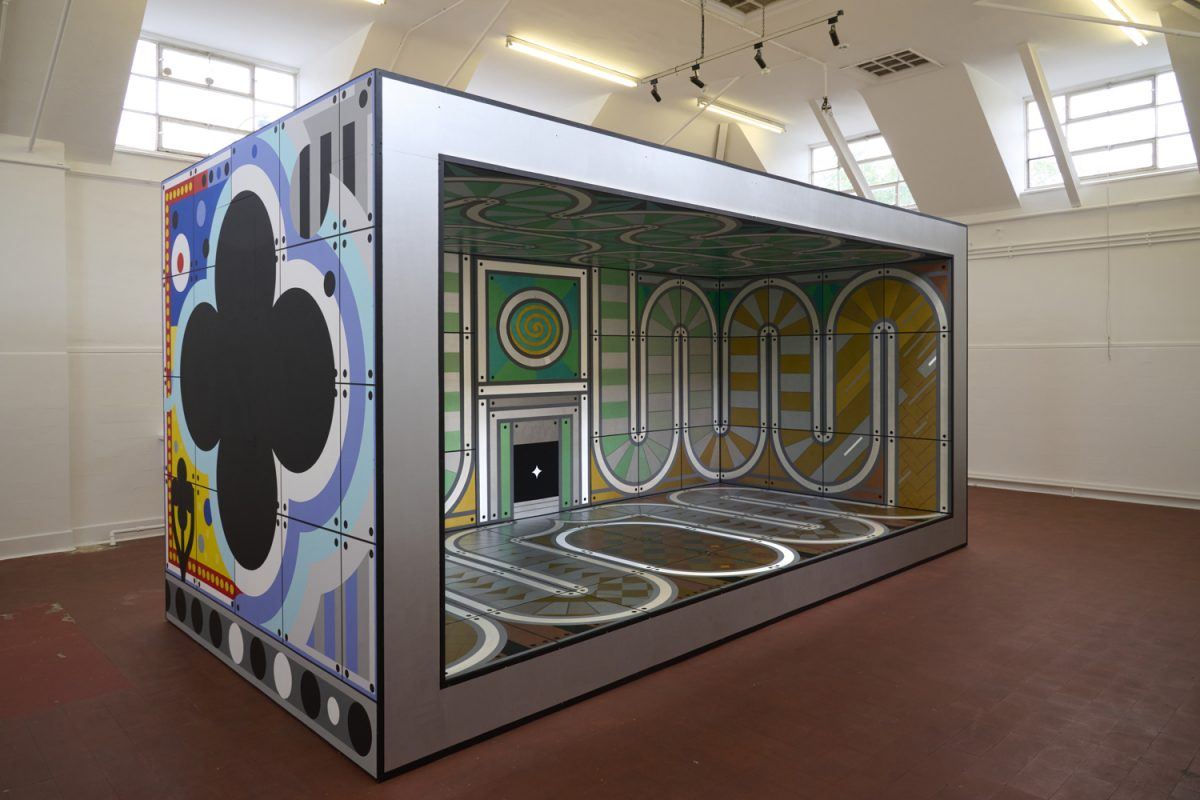 Tod Hanson is based in London and Berwick upon Tweed. He is known for his impactful large-scale graphic installations and artworks in the public realm. Heavily influenced by his parent’s creative flair for scenery and costume design, Tod studied graphic design and public art. His creative journey continued from here and Tod went on to produce large scale projects for Greenpeace UK. Tod now combines these formative influences to explore nature, technology and mapping, interweaving landscape, architecture and historic design style, into large scale immersive installations and public artworks. 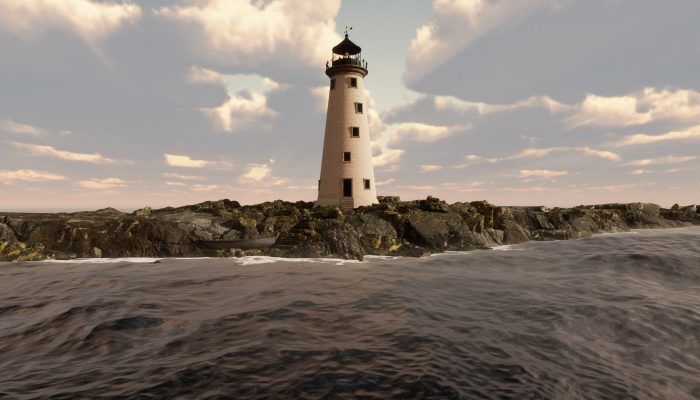 Dan Scott and Tom Adams at The Naseby Battlefield Project

In 2021 the Naseby Battlefield Project commissioned artists Dan Scott and Tom Adams to produce an artwork in response to their site as part of the Meeting Point programme.