A&H supported the development of the brief and selection of artists on this ambitious project at Compton Verney. The resulting project was called The Clearing; a collaborative artwork by Alex Hartley and Tom James.

The Clearing was a vision of the future in the grounds of Compton Verney Art Gallery and Park. Commissioned as a modern ‘eyecatcher’, a contemporary version of the kind of folly that Capability Brown would have built, the geodesic dome was made entirely from scrap materials. Alex Hartley and Tom James built this living, breathing encampment, in the shadow of the former stately home, where people could gather together to learn how to live in the world that’s coming our way. From March to December 2017, The Clearing became part school, part shelter and part folly.

In the middle of The Clearing was a geodesic dome. Inside the dome, a series of workshops taught skills that will be needed for when the sea levels rise and the global economy collapses. Outside of these workshops, a series of caretakers occupied the dome (aged 3 months to 60), to chop wood, feed the chickens, and keep the vision alive.

“The future will sound like chickens. And axes splitting wood. And people desperately fanning a dying fire with the lid of a biscuit tin…” – Ravina and Zoe, Caretakers, September 2017

The Clearing was a collaborative artwork by Alex Hartley and Tom James for people worried about the future.

Alex and Tom documented the work in a journal on the project website.

The Clearing remained in the grounds of Compton Verney as a useful ruin until 2020.

Compton Verney fully opened to the public as a major, nationally accredited art gallery in March 2004.

The much-praised special exhibitions programme offers both historic and contemporary shows and is designed to appeal to a wide audience.

The gallery is set in 120 acres of Grade II listed classical parkland, designed by Lancelot ‘Capability’ Brown, the most eminent landscape architect of the eighteenth-century.  Restoration of the parkland continues today with an extensive replanting and maintenance programme, designed to enhance Brown’s grassland, planting, ornamental lake, chapel – and the Cedars of Lebanon for which Brown is famous. 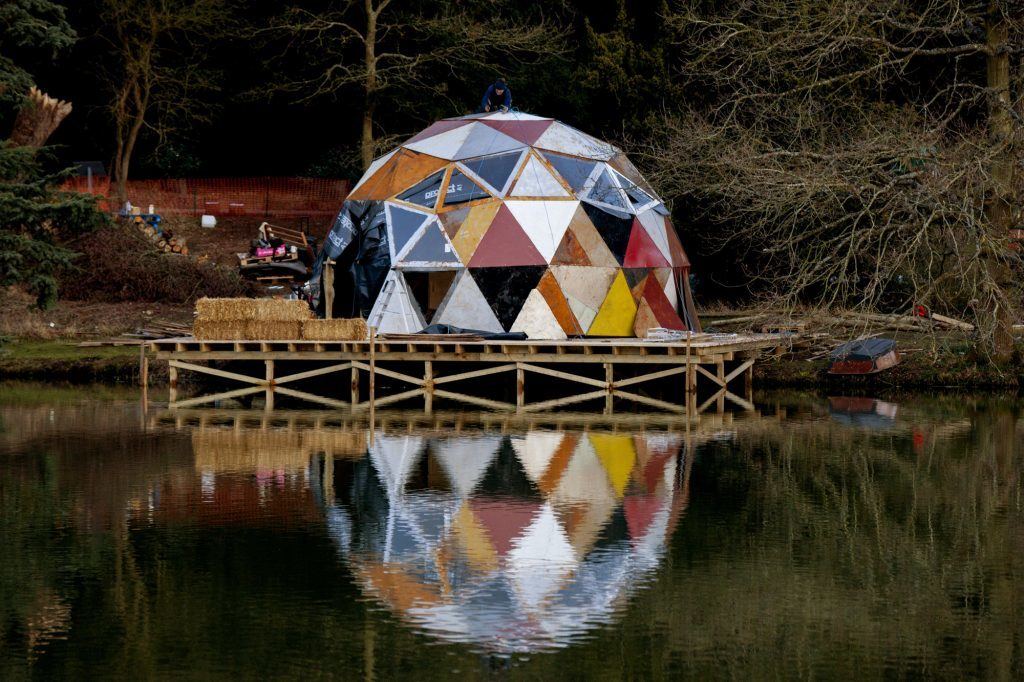 Alex Hartley is a contemporary artist, who has exhibited widely throughout the world since leaving the RCA in the early 1990’s. His ten-year project Nowhereisland was one of the signature projects for the London 2012 Olympics, bringing a newly discovered Arctic island to the UK. More than 23,000 people signed up as citizens of this new country. He was part of the 2014 Folkestone Triennial, and in 2015, he won the Arts Foundation award for Art in the Elements, and the COAL prix for Art in the Environment. In recent years, Alex has increasingly made post-studio works outside of the gallery, often involving occupation and participation. Current projects include a major commission for Somerset House’s Utopia season, a modernist ruin for Kentucky, and an occupied bunker for Victoria Miro Gallery London.

Tom James is a writer, self-publisher and artist. He has ten years experience of creating innovative publishing projects to help people reimagine structures, communities and ideas. Tom’s work has been featured across the national media; his campaign to reuse two abandoned cooling towers as art was the focus of a Channel 4 documentary; and his fanzine, Go, is part of the permanent collection of the V&A. Tom is also part of Spacemakers, an arts and regeneration agency based in Brighton. Tom led the Cricklewood Town Square project for Spacemakers, a public space project in North-West London that engaged and worked with various community groups to bring disused ground to life. Recently, Tom’s practice has headed in a new direction. He’s currently producing A Future Manual: a DIY guide that aims to explore the skills we’ll need in a future depleted by climate change. He has run fire-making workshops at g39 in Cardiff, and distributed the manual at the London Art Book Fair, at Whitechapel Gallery.