Shandy Hall was one of nine heritage sites selected by Arts&Heritage to take part in its Meeting Point 2016 programme. The museum took part in a series of A&H training workshops and visits, to learn how to successfully deliver a contemporary art project. The museum then developed their own Artist’s Brief, and presented this to 40 artists from across the UK at a networking event. From Expressions of Interest, three artists were shortlisted to draw up a more detailed proposal from which the museum selected Anne Vibeke Moe for the commission.

Shandy Hall in Coxwold was the home of author Laurence Sterne, who lived there in the 1700s. Laurence Sterne was the author of The Life and Opinions of Tristram Shandy, Gentleman, as well as being the vicar of Coxwold, near York.

While living at Shandy Hall he also wrote A Sentimental Journey through France and Italy, although he died before this story could be completed. These two works have given him an international reputation.

“Shandy Hall is the place where Laurence Sterne lived and worked as a writer. He told the story of Tristram Shandy using startlingly modern visual devices, not just text, and Anne Vibeke has responded to this in her artwork.”

Vibeke made a work for the Dining Room at Shandy Hall, in particular for the window that looks out over the box-bordered front garden. One of the recurring themes in Sterne’s books is the passing of time and this influenced Vibeke. Using the ancient Japanese art of marbling known as Suminagashi (ink floating) to guide her, Vibeke made an artwork of sixteen panes of glass in this heart of Shandy Hall. The landscape, the movement of the sun, the time of year, the time of day and the position of the viewer invited a continually shifting perspective as the patterns embedded in the window emerged and receded from one moment to the next.

“In a way, I am using sunlight to draw onto the window of the dining room in Shandy Hall. I’m using an ancient Japanese form of marbling to capture unique, one-off ink patterns. I’m transcribing those patterns to individual panes of glass which are etched by hand with a diamond, creating tiny fractures in the glass so that the sunlight is trapped and the window holds patterns which change as the sun moves” – Anne Vibeke Mou

A Window for Shandy Hall reflects the author’s use of marbled pages in his books, which turned each book into an artwork in its own right. Vibeke used the ancient Japanese art of Suminagashi or ‘ink floating’ to guide her engravings on the dining room window, and worked with a York-based stained glass conservator, Barley Studio, to install the piece.

“Anne has captured the mood of Laurence Sterne’s work, placing her etching in a window where sun will track across it and mark the passing of time.” – Patrick Wildgust

A publication, A Window for Shandy Hall was produced in an edition of 300, with an essay by Patrick Wildgust, Curator, The Laurence Sterne Trust at Shandy Hall; read the essay here.

Shandy Hall is an independent accredited museum that is managed and maintained by The Laurence Sterne Trust.

Shandy Hall is a writer’s house museum in the former home of the Rev. Laurence Sterne in Coxwold, North Yorkshire, England. Sterne lived there from 1760 to 1768 as perpetual curate of Coxwold. 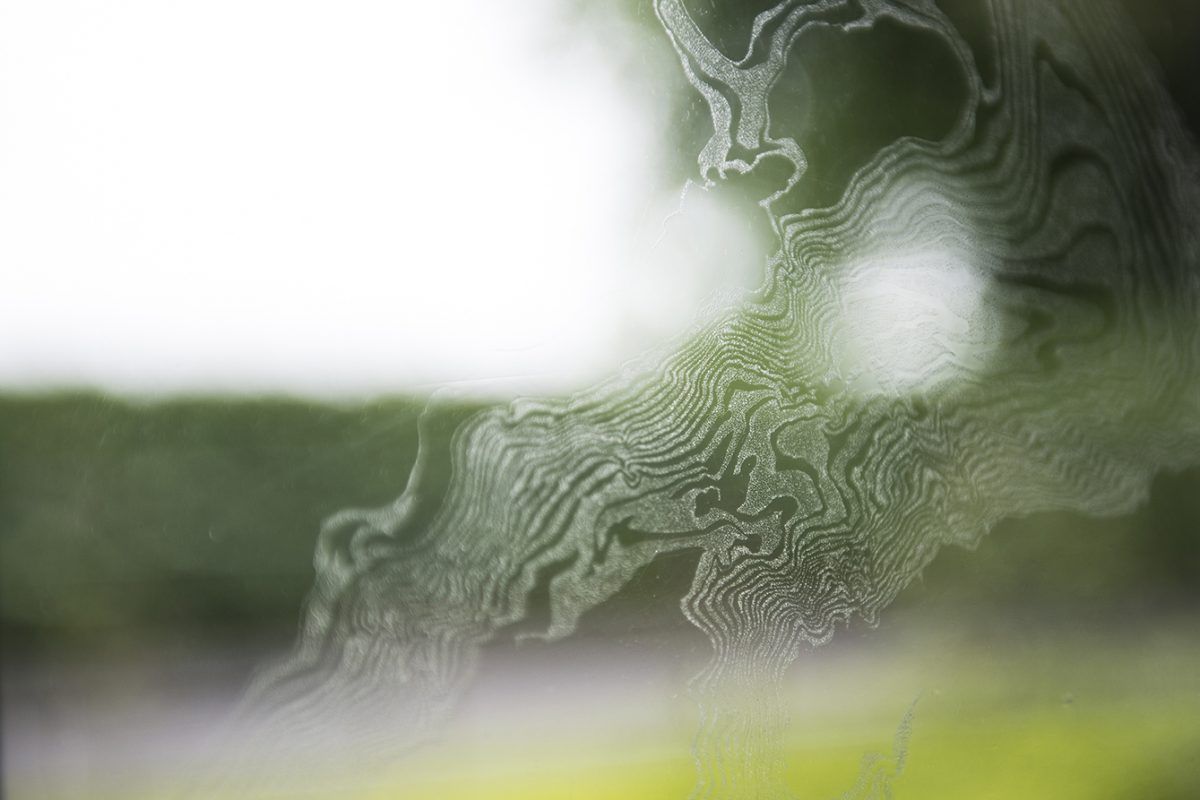 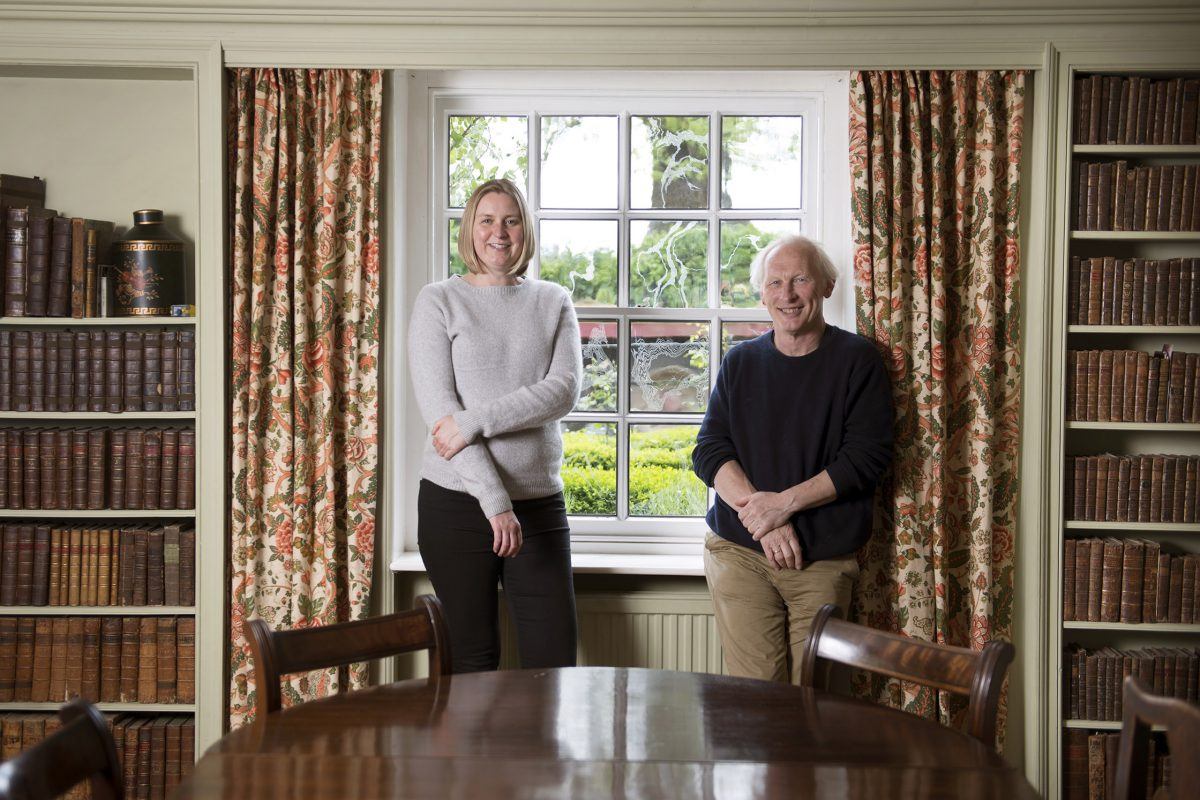 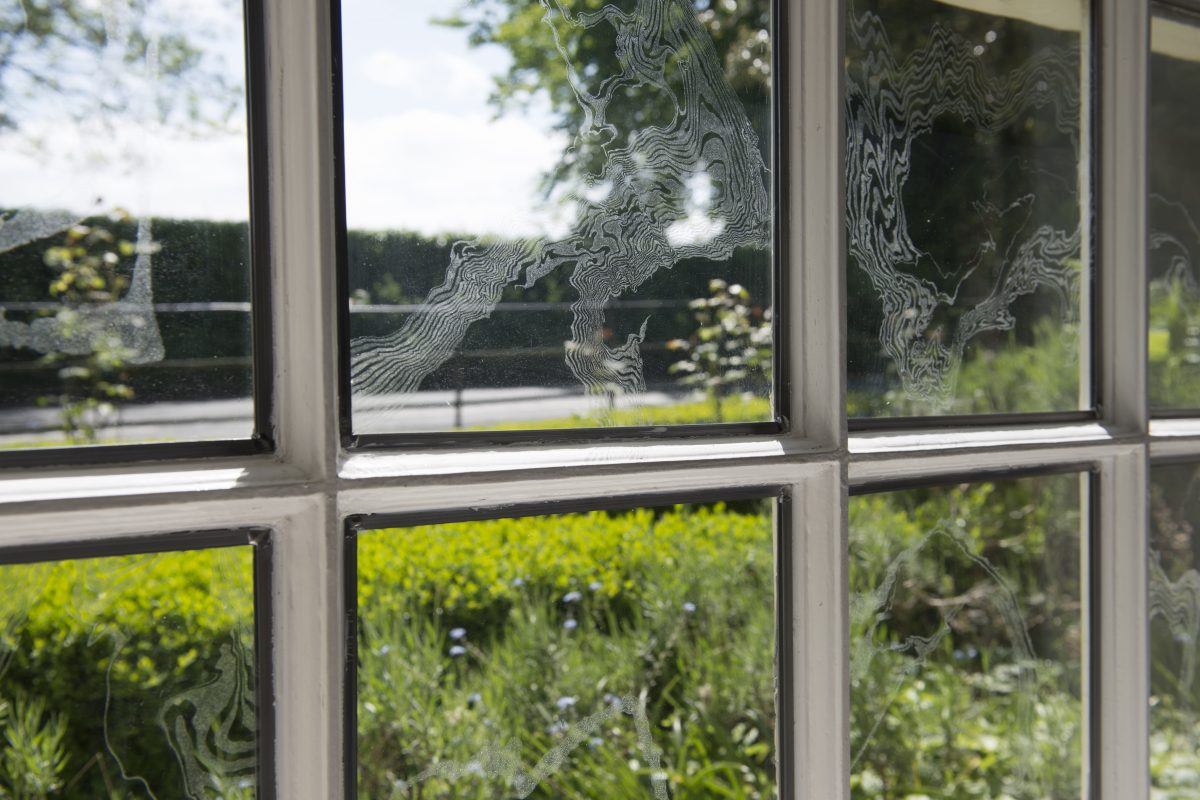 Anne Vibeke Mou is a Danish artist based in Newcastle upon Tyne. Her work involves drawing, sculpture and engraving on glass, often using repetition, intuition and chance to create complex surface variations, which unfold over time.

Anne Vibeke Mou (b. 1978, Denmark) studied at Glasgow School of Art and Royal College of Art, London and lives and works in Newcastle upon Tyne. She has exhibited nationally and internationally including residencies at the Academy of Arts, Architecture and Design in Prague, Upernavik Museum, North West Greenland and the National Glass Centre, Sunderland. A privately commissioned window for St Johns Church, Healey in Northumberland won the Art and Christianity Award 2011. As a co-curator, exhibitor and editor Anne Vibeke organised Chance Finds Us (2014), an exhibition and catalogue of works by eight artists from the North East for Mima, Middlesbrough.