“The Colne Valley Museum really spoke to me because I bought into this idea that it was a living museum, not only in its concept but also in its working methods. It is entirely volunteer-run and it’s been going for 50 years; I thought there was an amazing story behind the museum and I liked the fact that the volunteers were so ambitious and so passionate about what they do.” – Ed Kluz, in his interview with Yvette Huddleston for the Yorkshire Post

Colne Valley Museum was one of six heritage sites selected by Arts&Heritage to take part in its Meeting Point 2018-2019 programme. CVM took part in a series of A&H training workshops and visits, to learn how to successfully deliver a contemporary art project at the museum. CVM then developed their own Artist’s Brief, and presented this to 60 artists from across the UK at a networking event. From Expressions of Interest, four artists were shortlisted to draw up a more detailed proposal from which CVM selected Ed Kluz for the commission.

A vibrant and politically active community of makers has shaped the identity of the Colne Valley for over 300 years and new generations continue to draw inspiration from these trailblazers. Ed Kluz collaborated with members of the Colne Valley Museum and local community to create a number of new works which echo and respond to the form and purpose of traditional objects often found in the homes of 19th century makers of the region. These were installed within the museum, in domestic rooms across the building.

Colne Valley Museum is housed in four weaver’s cottages, built in the 1840s by a family of independent cloth manufacturers. With this in mind, Kluz met regularly with the museum’s craft and textile groups to discuss the history of textile-making in the area, and from these conversations a series of needleworks were made for the exhibition that presented mottos from the 18th and 19th centuries. Slaithwaite-based McNair Shirts also generously gave their time and expertise in helping to create a processional banner made from wool cloth, woven on the museum’s early 19th century handlooms. This process of group discussion, exchange and participation was central to the project, and the local volunteers that Kluz worked with were:

Kluz’s collaborative approach to the project and the use of traditional skills, celebrated both the history and the future of the museum and the valley.

The museum has a wonderful collection of household items that commemorate political events or have maxims on them, and Kluz displayed a selection of these in a Victorian cabinet alongside new pieces he had made with activist slogans on them. Messages such as, ‘Unity & Strength’, and ‘Liberty and Fraternity’ reminded visitors of the radical political history of the Colne Valley, both of its independent makers, but also of a period from 1910-69 when one of the weavers cottages was taken over by the Golcar Socialist Club.

“I hope this exhibition helps people remember why we need preserve and protect Golcar’s textile and manufacturing heritage. With so many independent makers in the area, Colne Valley Museum can become a place of learning and help revive traditional manufacturing techniques that risk being lost and forgotten.” – Ed Kluz

Colne Valley Museum is based in Golcar near Huddersfield and is a Grade 2 listed building housed in four weaver’s cottages, built in the 1840s by a family of independent cloth manufacturers. The cottages are built into the steep hillside of Golcar and were once owned by the Pearson family who inhabited one cottage with their five adult children. The family were all hand loom weavers, later becoming power loom weavers. The other three cottages that today make up the Colne Valley Museum were initially occupied by relatives of the Pearson family.

The museum has a strong intimate atmosphere and identity. The Pearson family resided in the cottages for many years, passing it on to their children, many of whom remained within the weaving industry.

In 1910 one of the cottages was taken over by the Golcar Socialist Club who remained there until 1969, at which point the Socialist Club donated the cottage to become the Museum. The next two cottages were acquired in the early 1970s, but the upper cottage and adjoining shop were only bought in 2010. All four buildings were finally amalgamated into one visitor attraction at the beginning of 2017 – the Colne Valley Museum.

The first episode of the Arts&Heritage podcast, hosted by Judith King, discusses IN PRAISE OF MAKERS with Ed Kluz, and the museum’s lead volunteer curator Melanie Williams. The podcast considers the advantages of working with artists in the museums sector generally, as well as the more specific mutual benefits of Colne Valley Museum’s collaboration with Ed Kluz – from breaking down hierarchies between artists, audiences and volunteers to telling the alternative histories of spaces and objects and reinterpreting collections from new and defamiliarising perspectives. 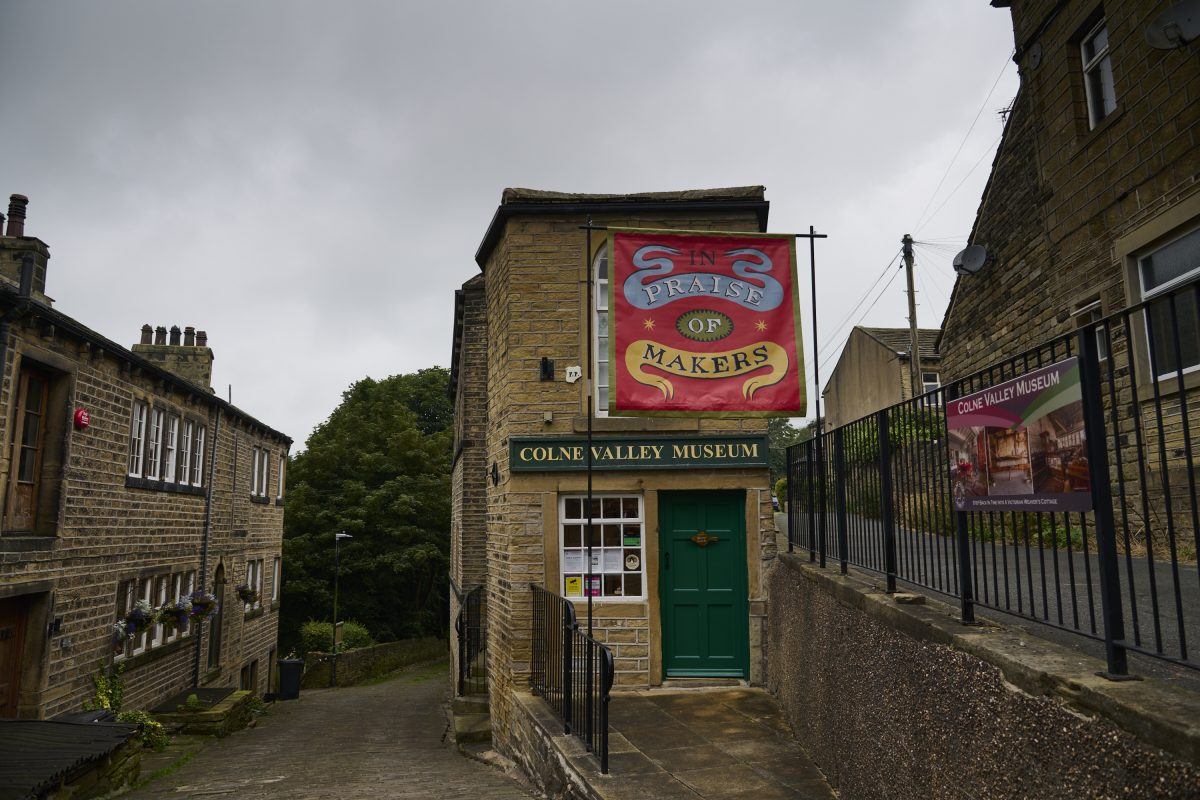 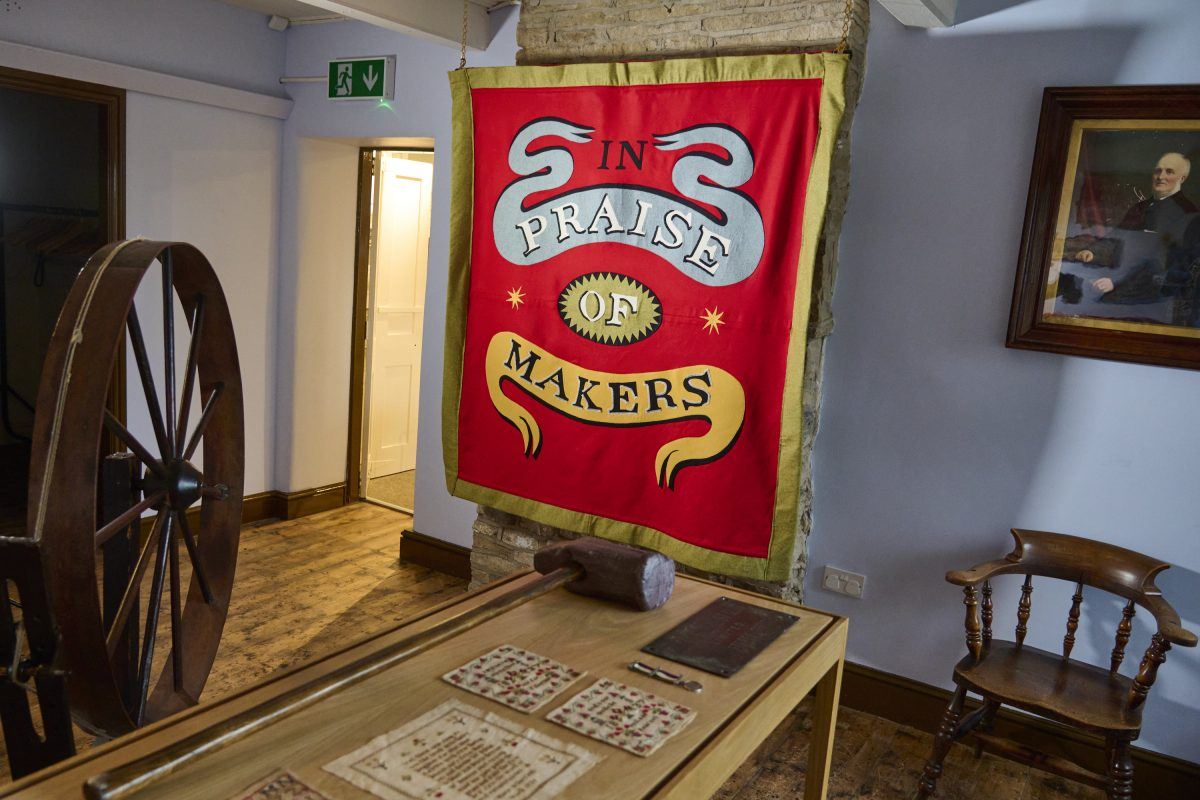 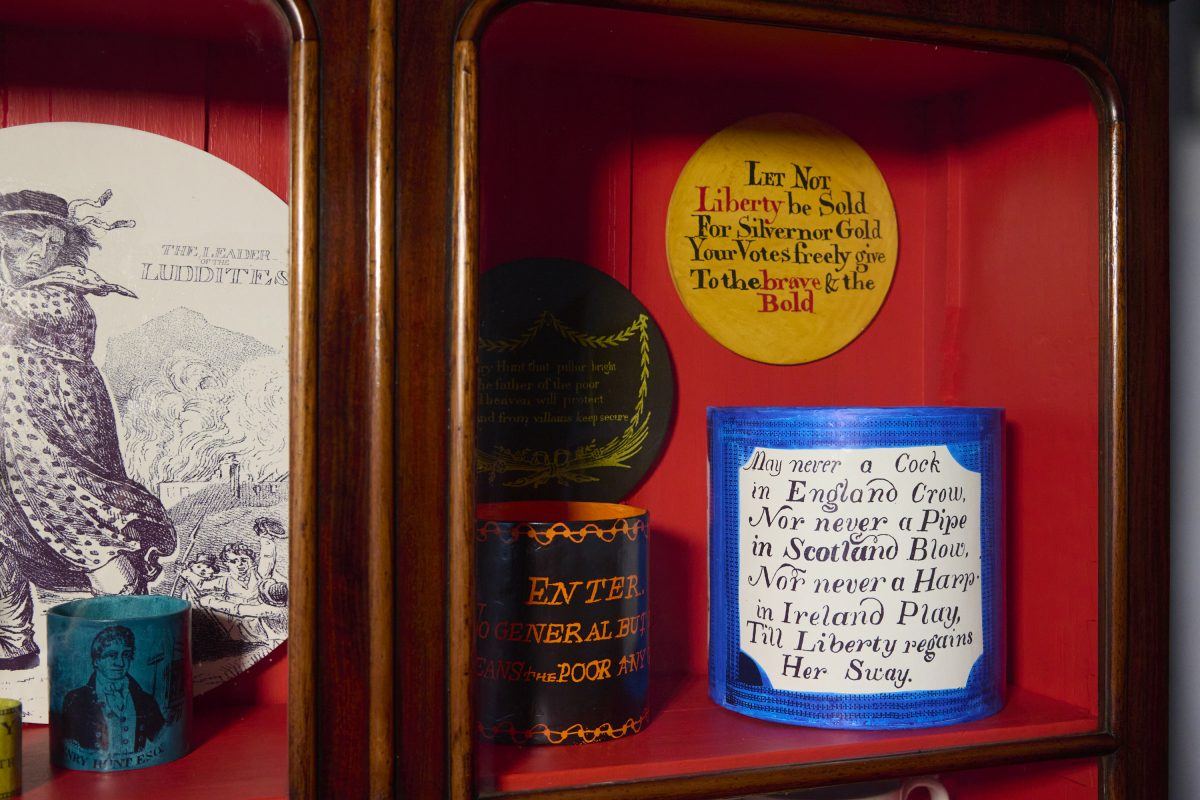 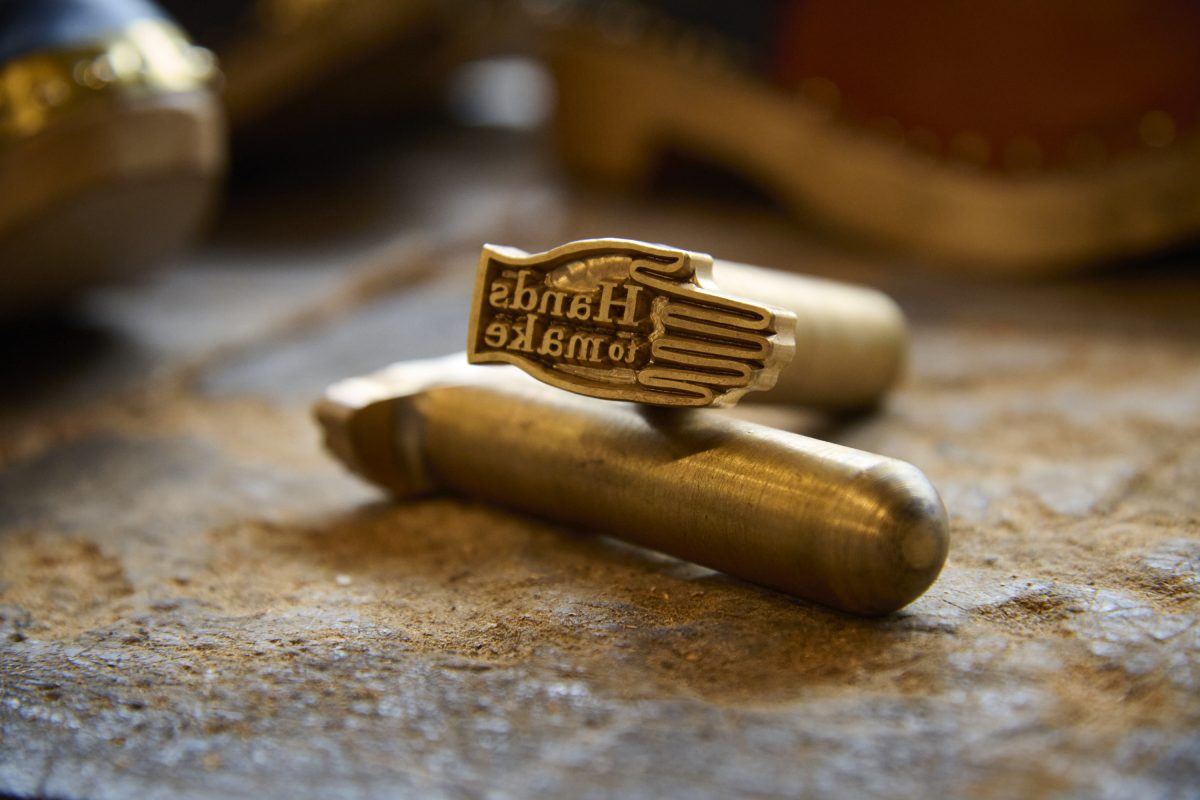 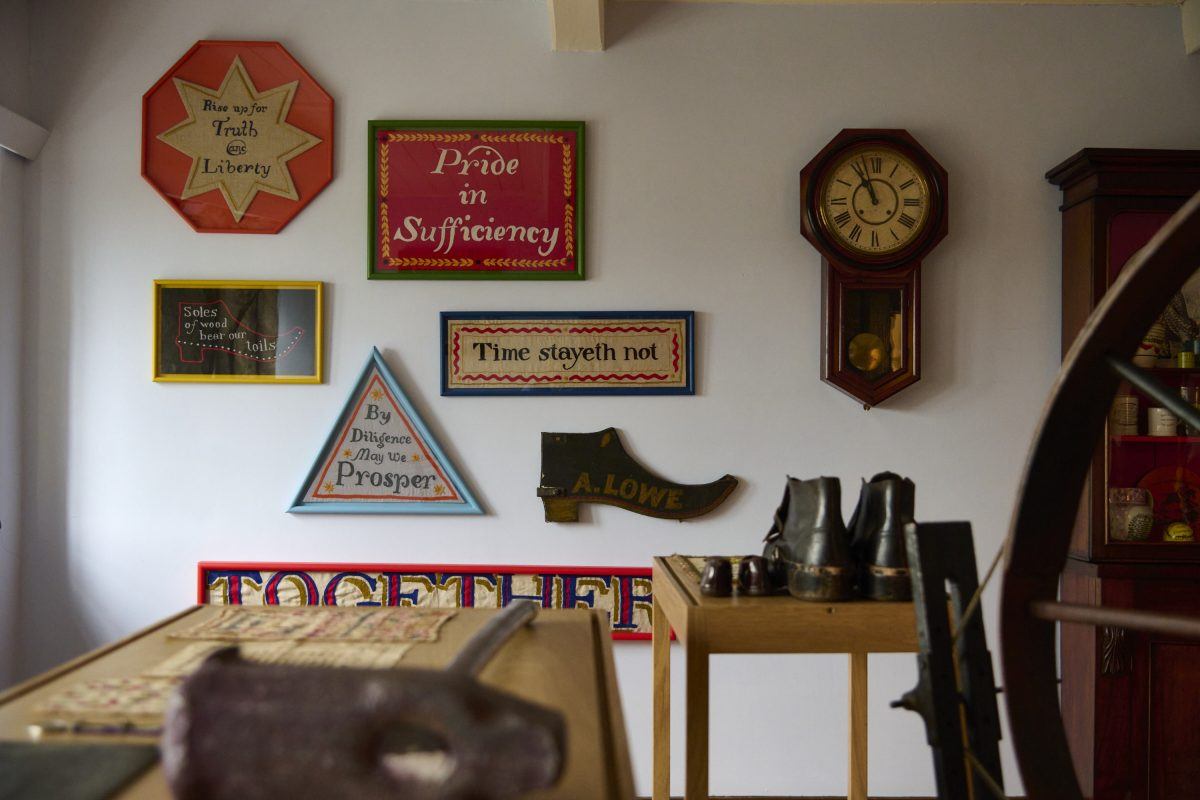 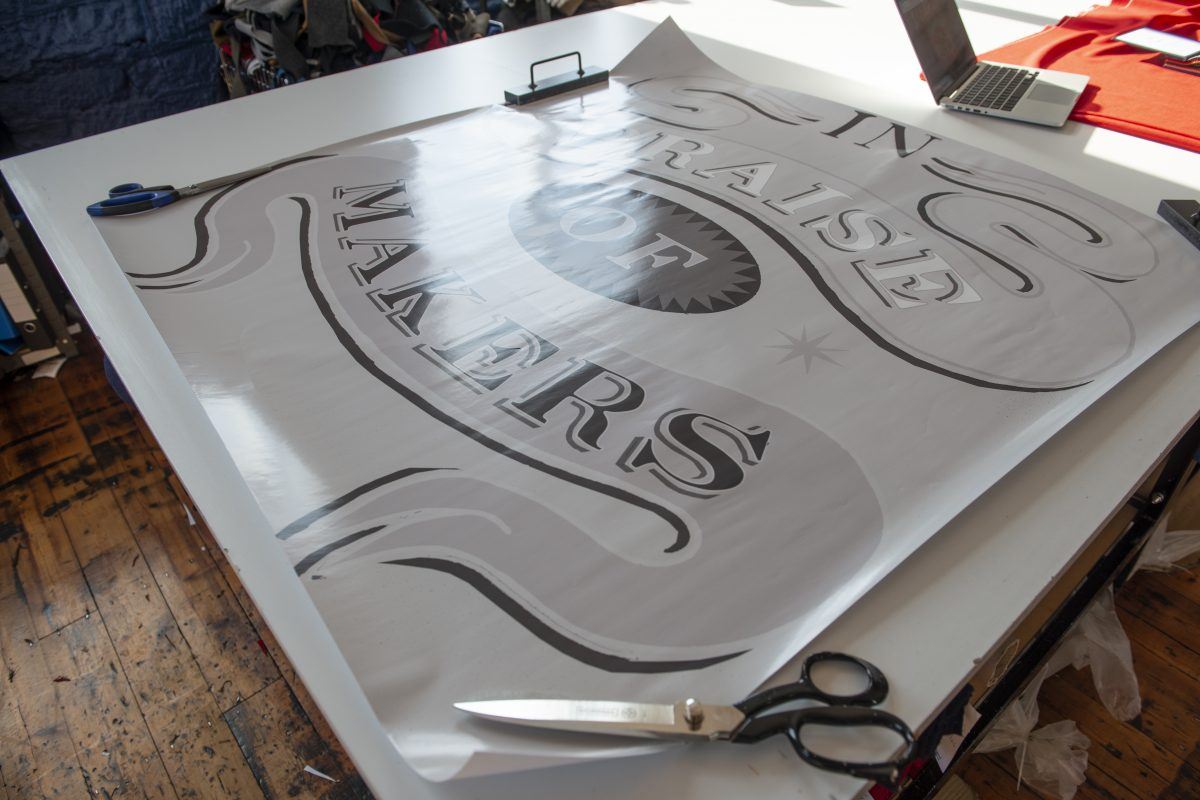 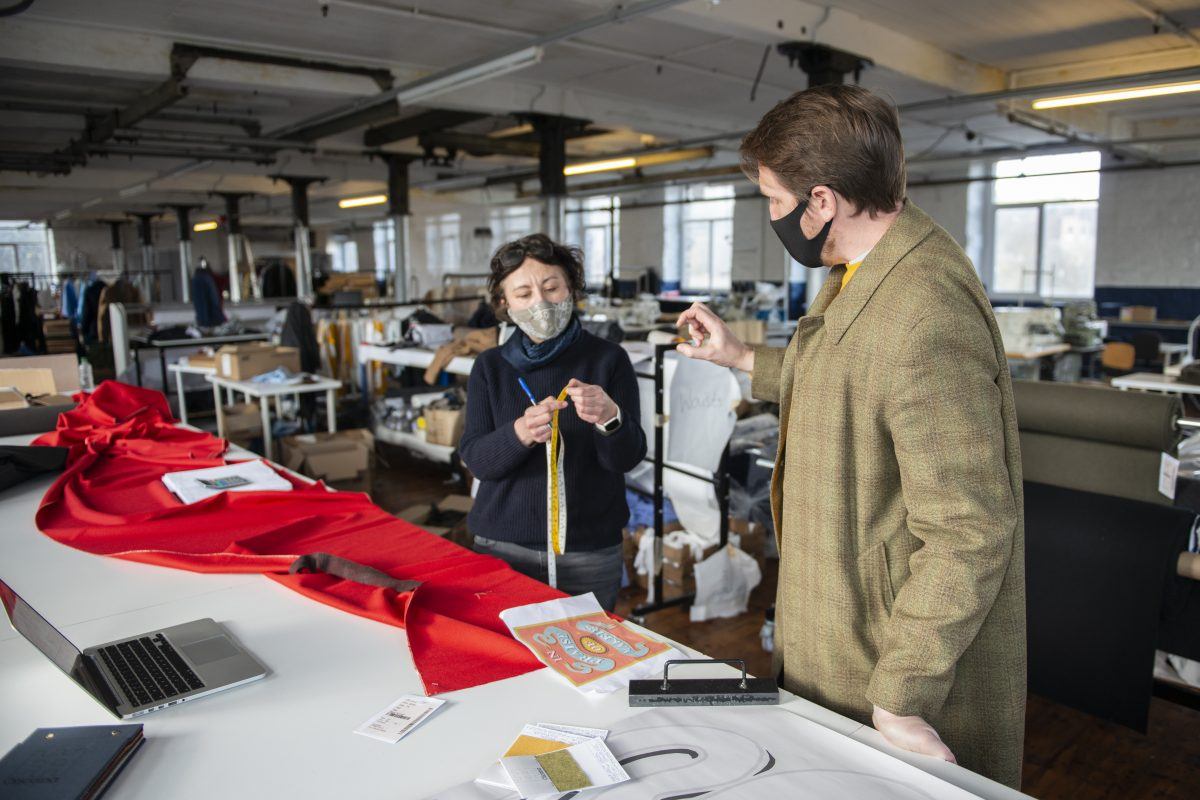 Ed Kluz is an artist, illustrator and printmaker. His work explores contemporary perceptions of the past through the reimagining of historic landscapes, buildings and objects. The ideas of early Romanticism, the Picturesque movement and antiquarian representations of topography and architecture underpin his approach to image making. He has a particular interest in the eccentric, uncanny and overlooked – follies, lost country houses and ruins provide a constant source of inspiration. As a designer and illustrator Ed has received commissions from the V&A, Faber, Folio Society, John Murray publishers, Little Toller Books and St Jude’s fabrics. Ed was born in 1980 and grew up in Swaledale, North Yorkshire. He studied fine art at the Winchester School of Art.