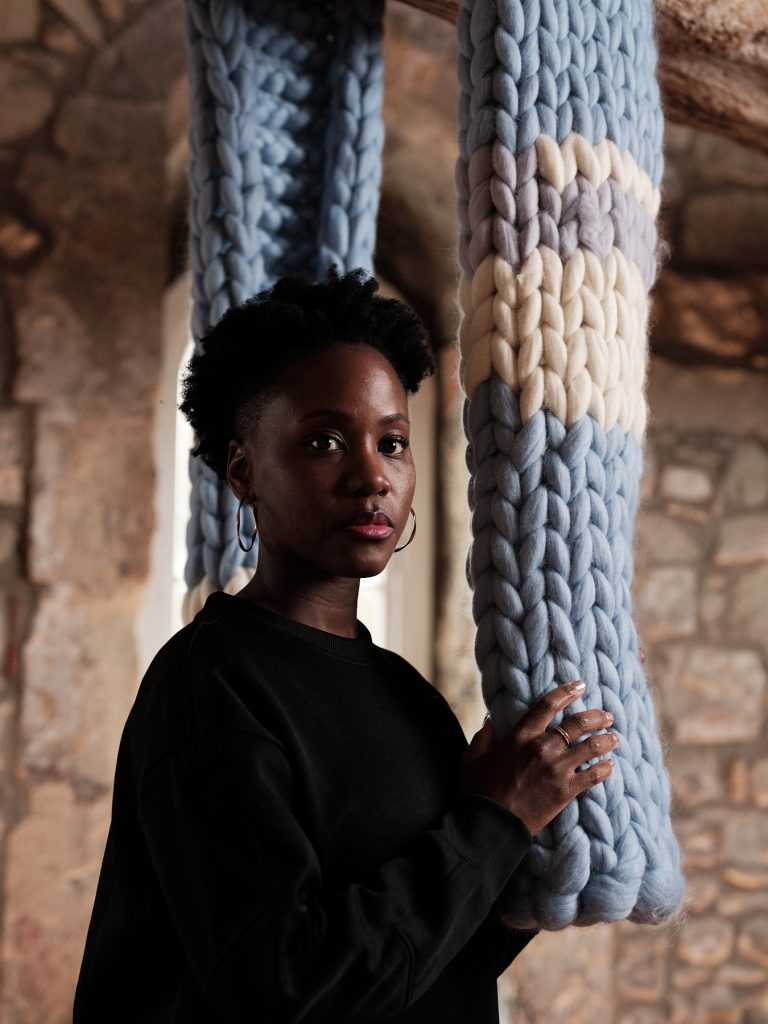 A unique new artwork by acclaimed British-Ghanaian textile and performance artist, Enam Gbewonyo, exploring the history of one of Southampton’s most important monuments opens at God’s House Tower in Southampton from Friday 17 June 2022.

Gardez L’Eau draws on themes of trade, travel, colonialism and piracy; and uses materials from God’s House Tower’s past to create a sculpture that runs through the entirety of the building.

The knitted artwork, which begins on the roof of God’s House Tower, is made from three different materials; each one significant to the building’s history.

The first section of the sculpture is made from knitted steel wire shaped into chain link and will act as a reimagined time-ball, originally used by Mariners to tell the time. The steel wire represents the metal once used in God’s House Tower for prisoner’s chains, and the chains of ships’ anchors, which would be moored near the building.

The second part of the sculpture incorporates knitted wool and rope in reference to the materials pillaged from King Edward III by French invaders, and the oakum that prisoners used to pick from ropes.

“Because of God’s House Tower’s location near the The Solent, I was inspired by how the sea brought war, trade, and settlers to the city of Southampton, and how people of all different walks of life have passed through the building during its history.

The sculpture symbolises the captivity and enslavement of people imprisoned in God’s House Tower, but also reflects on themes of community and unison. These two contrasting narratives reflect the experiences of people that came to God’s House Tower over the centuries.”

In addition to the sculpture, Enam has also developed an accompanying performance that will take place on Saturday 16 July. An ode to the people of Southampton, it will reference traditional Morris dance, Aurresku – a traditional Basque dance – and the Masquerade dance of St. Kitts in honour of each country’s connection to Southampton and God’s House Tower. A film of the performance will be also added to the exhibition.

“We are excited to be working with Enam and bringing this new and unique commission to Southampton.

A lot of Enam’s work tackles issues around identity, racism and colonialism, and I think that’s why God’s House Tower had such an impact on her creative approach for this project, and in turn why the project aligns with the ‘a space’ arts values and ethos, and resonates so strongly with us.

Enam is using this incredible and storied building as a portal to transport people through its history. The work also acts to draw the outside in, highlighting the importance of the sea in carrying war, wealth, and refuge to Southampton.”

A soundscape by Southampton-based Spanish sound artist and producer, Anihma, will act as an accompaniment to the artwork and performance. Featuring traditional English folk music, Basque music, and calypso music, it will nod to the city’s connections to Spain and the Caribbean.

“What’s unique about the Meeting Point programme is that is gives heritage organisations the opportunity to present their collections in an entirely new way, helping attract new audiences and re-frame how people interact and respond to our recorded history.

“Enam’s work isn’t afraid to tackle challenging and often uncomfortable aspects of our past, and it’s this honest and open approach that creates such impactful and moving artworks.”

As part of the exhibition at God’s House Tower, Enam will be taking part in ‘a space’ arts’ Artist Voices programme, which will see her in-conversation with curator, writer and lecturer, Péjú Oshin, on 28 July from 18:00 to 20:00. Delivered as part of Meeting Point, Enam and Péjú will discuss Gardez L’Eau, and dig deeper into the creative processes artists and curators use when working with museums and heritage sites to respond to their histories and collections. The in-conversation event will also be streamed online.

Artists living and working in the SO postcode can also register to take part in a limited number of one-to-one developmental sessions with Enam, taking place on 21 July from 09:00 to 12noon. These sessions are designed to give artists from Southampton and the surrounding area the chance to get feedback on their work, and ask questions relating to their practice and the wider arts sector. Places are on a first come first served basis and can be booked by visiting www.aspacearts.org.uk.

Gardez L’Eau will be on display at God’s House Tower, Southampton, from Friday 17 June until Sunday 14 August. The live performance will take place on Saturday 16 July.

God’s House Tower is open Friday and Saturday, 10am – 5pm; and Sunday, 10am – 4pm. For more information, visit www.godshousetower.org.uk