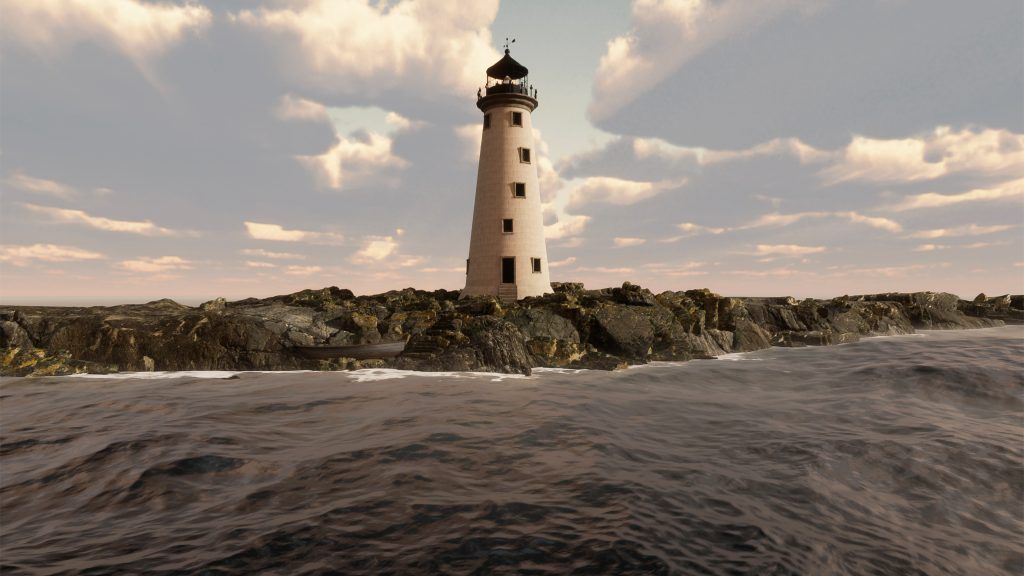 Grace Darling: heroine, celebrity, attention seeker, fake? In ‘Grace’, Sophie Dixon’s computer generated three-channel film, conflicting descriptions circle around the idea and reality of Darling – the lighthouse keeper’s daughter who went from nobody to national treasure after rescuing nine people from the wreck of the SS Forfarshire on 7 September 1838. At under 10 minutes, ‘Grace’ is concise, packed with historic visual references, and driven by a narrative that resists simple heroine worship in favour of something more nuanced and complex.

Darling died from tuberculosis aged 26, just four years after her act of bravery made her a household name. But the tragedy of her story begins much earlier, as the film’s voicing of archive material unequivocally reveals. As public fascination with this unassuming, private young woman quickly grew, her father wrote in a letter at the time: “You can hardly form an idea how disagreeable it is to my daughter to show herself in public.” The sense of Darling being both hunted and haunted by the scrutiny she received following her actions one stormy late-summer morning is intensely felt in the dark menace of the lapping sea that opens the film, the dimly lit interiors of her frugal lighthouse home, and the bright menace of the revolving lighthouse beacon.

Dixon’s digital rendering of the 19th century lighthouse, along with a script that gives voice to Darling, her family and the media commentary of the day, places the viewer at a time shortly after her death. Yet the film is much more than a piece of historical re-enactment, and it isn’t only the use of computer game technology to create this virtual world that makes ‘Grace’ so utterly contemporary. As a soundtrack that features words of praise and respect for Darling becomes interspersed with voices questioning her bravery and personal integrity – “There was no danger”; “Anyone could have done it” – the haranguing tone calls to mind a very 21st century scourge – that of online trolls. Then as now, there are always those who find something ‘wrong’ in someone doing the ‘right’ thing. Particularly when that someone is a woman.

While such gender bias is true of our world today, for Darling it would have been all-consuming – and key to why her selfless actions attracted such interest in the first place. Dixon highlights this sense of a young woman being seen and judged by the male gaze of journalists, portraitists and the public life of the time, in part by placing throughout the lighthouse interior digital copies of the many depictions of Darling held in the RNLI’s Grace Darling Museum. These paintings, sketches and busts were not only made immediately following the events of 1838 but also after her death, as she was further venerated and mythologised. What Dixon wants the viewer to think about, it seems, is not so much Darling’s deed and what it says about her as a person, but what the deeds of others in their memorialising of her say about them – and ultimately about us.

In ‘Grace’, we are submerged for a moment in an idea of heroism that endures like a lifeline to the past. But rather than just hold on tight to it, we are offered a brief but compelling opportunity to contemplate a deeper, more complicated story. One that can’t be contained within a stoic marble bust or a dramatic, spume-filled painting of Darling and her lighthouse keeper father.