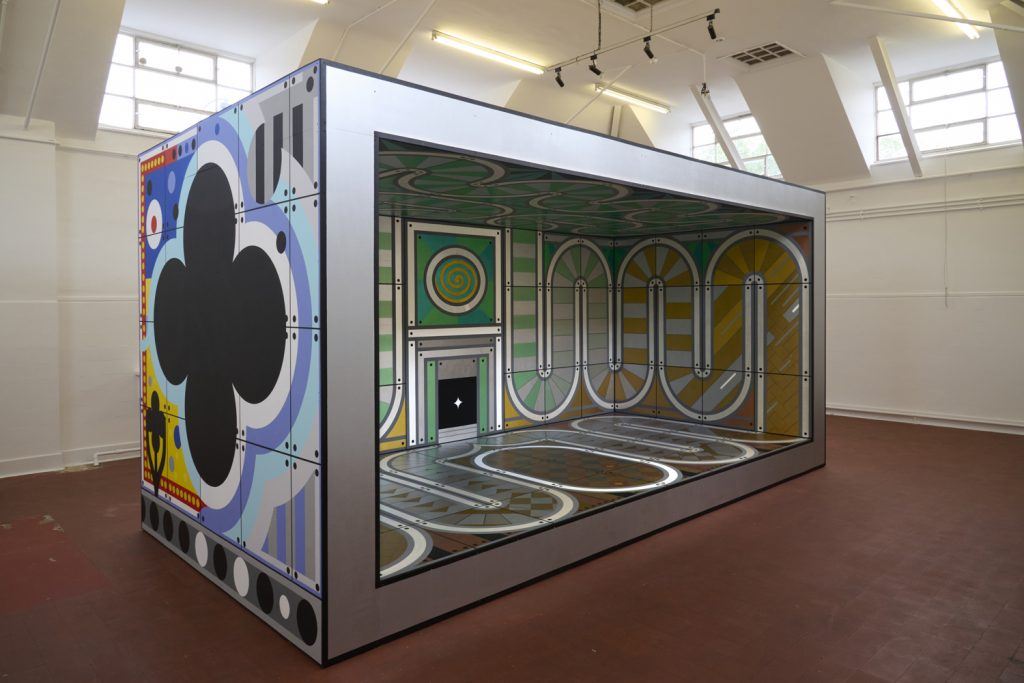 A new, large-scale art installation inspired by the iconic Sunlight soap packaging will be unveiled at Port Sunlight village in the Wirral this summer, as part of the Meeting Point programme.

Created by artist Tod Hanson, Box Room combines graphics inspired by the world’s first packaged and branded laundry soap with references to the architectural features of the village and the industrial heritage of Lever Brothers famous soap factory.

“When it was first produced, more than 100 years ago, the red, yellow and blue of Sunlight’s packaging was loud and modern, crashing into people’s homes, shops and high streets,” said Tod Hanson. “It still has that visual power today, I wanted to play with an iconic graphic and make it reveal something of the factory village behind it.”

Box Room is on show inside Port Sunlight’s church hall, which was once part of the MacFisheries shops complex in the village and thought to be used as a bakery. The outside of the 18 foot long box installation amplifies graphic elements from the Sunlight packaging, while inside is a room which fuses the functional design of a factory space with a decorative domestic interior.

Port Sunlight was founded in 1888 by William Lever to house the workers at his soap factory. More than 900 Grade II listed buildings are set in 130 acres of parkland and gardens and nearly every period of British architecture can be seen in the design of the houses and monuments, which were created by more than 30 different architects.

Sunlight soap was first produced in 1884 and gave its name to Port Sunlight village which, as well as the workers’ houses, had allotments, a cottage hospital, schools, a concert hall, an open air swimming pool and the Lady Lever Art Gallery.

“Tod’s installation is totally different from anything that’s been on show at Port Sunlight before, but it still perfectly reflects the village, its landscape and history. It’s bright, colourful and bold and it shows Port Sunlight as seen through Tod’s eyes – I think it will really challenge people’s perceptions about Port Sunlight and will give people a new perspective on the village and its story.”

Box Room is part of Meeting Point, an Arts&Heritage programme that presents artworks in unexpected places and supports small and medium scale museums to commission artists, forging new relationships between the contemporary arts and heritage sectors.

For this round of the programme, leading artists have been partnered with six museums in the North East, Yorkshire and the North West to produce new artworks inspired by the museums and their collections.